If you’ve spent any time in the weeds of certain Twitter threads (typically, the ones that go viral for the wrong reasons), you’ve likely heard of Rick Paulas. For more offline personalities, you’ve likely seen his name if you’ve spent any amount of time walking down McGuinness Boulevard, across the Pulaski Bridge, or around McCarren Park. He isn’t running to be Greenpoint’s next assemblyman, nor is he trying to teach you guitar. Rather, he’s trying to sell you his book. Or, more recently, his audio-only radio play, The Lady in Greenpoint.

Rick has become something of a folk hero with his unorthodox marketing methodologies, both within the Twitter sphere and without. When it comes to his guerrilla tactics, you can find him plugging his latest publication as a reply to the latest facepalmable Tweet (often with lightning speed):

I spoke with Rick about The Lady in Greenpoint, our mutual affection for Greenpoint, and how this eclectic neighborhood of ours sparks inspiration from pen to paper. 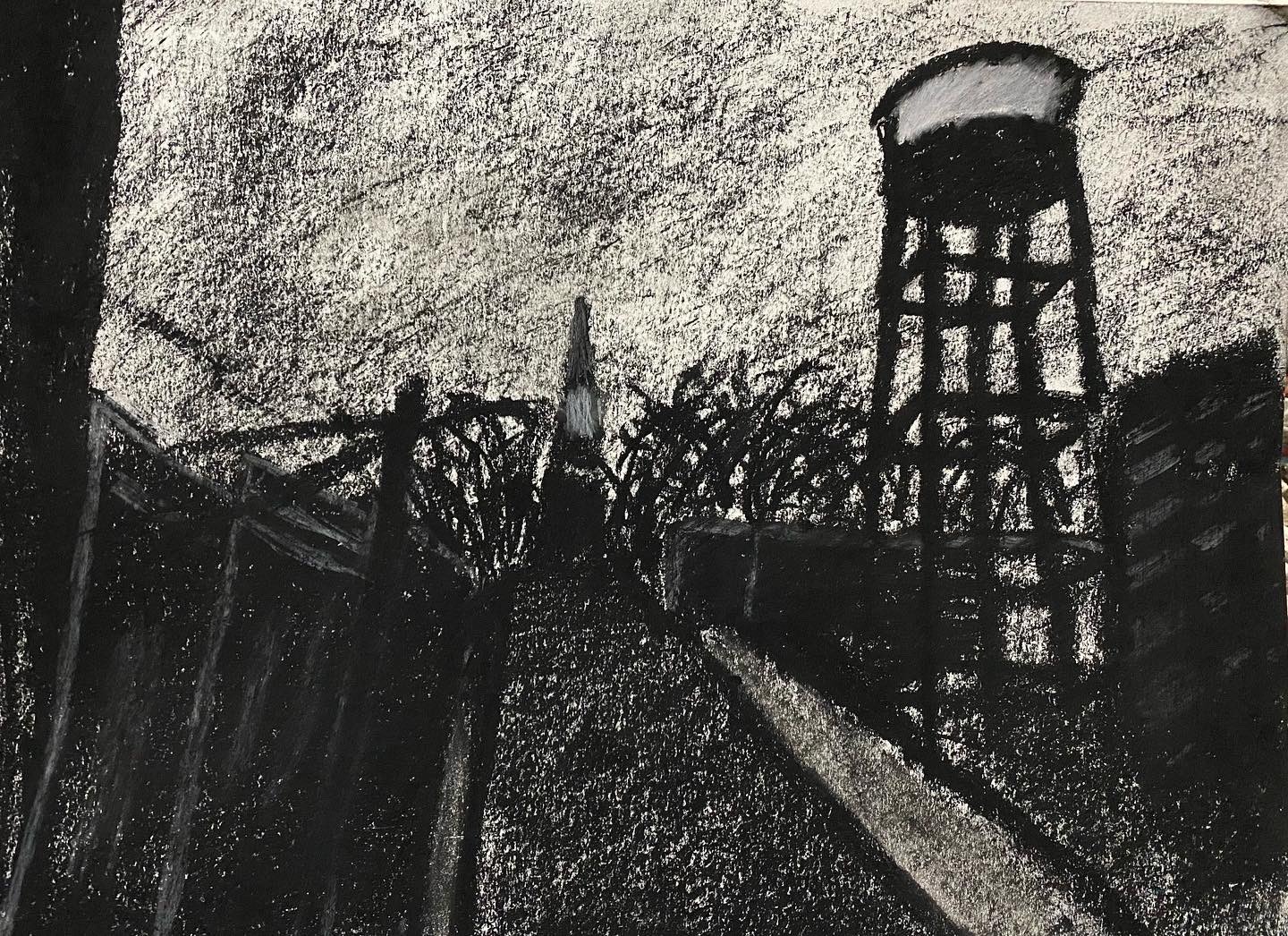 For the uninitiated, tell me about The Lady in Greenpoint.

RP: It’s a ghost story that you listen to as you walk a specific 3-mile or so path through Greenpoint, with the action taking place on the streets or in the buildings and bars where you’re strolling through. It’s sort of a mix between a radio play and a walking tour, I’d say.

What inspired you to write, record, and produce a 3-hour radio story set in Greenpoint?

RP: Desperation, mostly. My rent went up in February and so I’m not sure how long I can stick around here. I wanted to make something set here to commemorate the time for myself and to add something back, and this ended up being that.

How did you get your start as a writer?

RP: Oh, just emailing editors at online publications to see if they’d pay me some money for my articles. This was pre-smartphone and so it was tougher to find their emails, but once you did, if you didn’t fuck up and wrote decent enough, they’d pay you and want some more. Did that for about 15 years before I stumbled into a steadier income source that let me putz around on creative projects like this on the side.

Where’s your favorite place to write?

RP: Used to be at my apartment or coffee shops, but two of my last few projects have so driven by the specificity of place — this one, and Eastern Span, a neo-noir novel set on Oakland circa 2013 – that I’ve taken to writing on my phone while I’m sitting near the settings I’m writing about. It’s an old journalistic skill I’m trying to use for fiction writing, I suppose. At least on the first pass.

And the specificity of the neighborhood definitely shines through to me, someone who knows them well. How else does your journalism experience play into your fiction?

RP: It really kind of informs it all since I’ve been doing it for so long. If you report on an event, your goal is to capture whatever the essence of that is in words. In my fiction I hope I’m trying to do the same thing, even if those places and the people don’t exist.

For those who don’t live in Brooklyn, or anyone who can’t make the pilgrimage to Greenpoint, what do you hope they’ll take away from The Lady in Greenpoint? RP: Just a few hours away from whatever troubles they have and a way to see the streets a little differently. 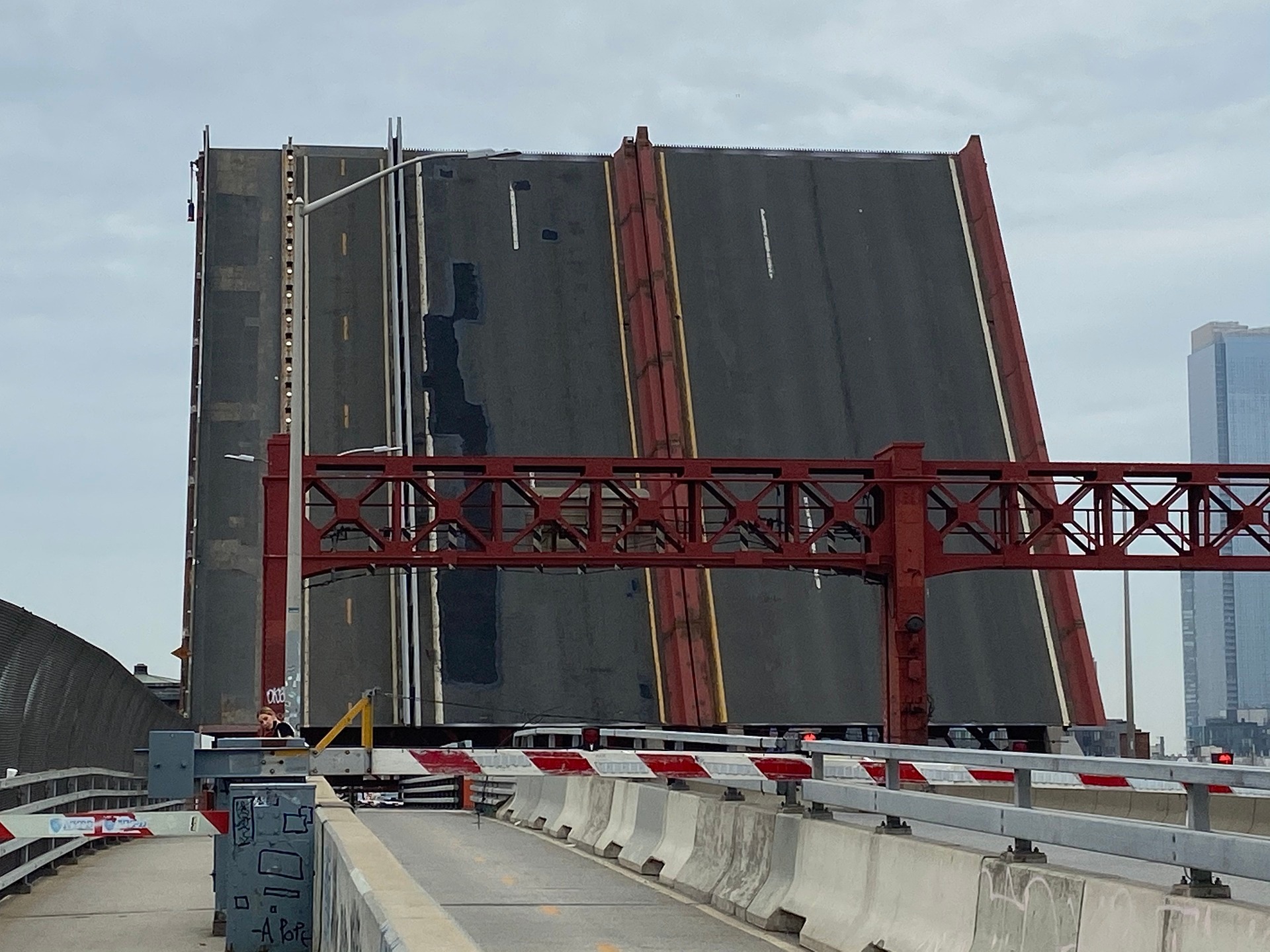 The Pulaski Bridge, which joins Long Island City and Greenpoint, plays a major part in the story and walking tour.

Other than the obvious, is there anything about living in Greenpoint that inspires your writing, even if not directly?

RP: Ever since visiting Greenpoint, well before I had the opportunity to live here, I’ve been wrestling with what makes the neighborhood such an evocative and specific mood compared to the rest of the city. Best I can figure is that it’s relatively cut off — it has the river on one side, the creek on another, the park on another, and the BQE on the fourth — despite being centrally located. So, you don’t get a lot of the through-traffic that you’d get elsewhere. Just a guess though!

You also wrote Eastern Span, an Oakland-set neo-noir, and The Palmer Hotel, a short story collection set at one downtown hotel — what do all these stories have in common? Or what inspiration do you find when writing any story?

RP: I mentioned this above some, but specificity of place is important. Once I have the setting — whether that’s fictional or based in fact — then I just let that place kinda speak to me as best I can.

RP: I mean, it’s hard to answer. This was obviously hard in ways that are super unique — developing the path, writing the script based on that, designing the sounds (which I’d never done before), getting the actors and fitting their voices in, etc. But it also took less time than writing, editing, re-writing, publishing, distributing a book. So who knows! Both are fun anyway!

Tell me about your Twitter-infamous marketing strategy.

RP: Just some dumb bullshit I lucked into and now am sick of haha.

And you've also been plastering ads for The Lady in Greenpoint throughout the neighborhood, which I've come across. It's a creative endeavor to do a strictly guerrilla campaign, so to speak. Do you find yourself always thinking of new ways to get the word out?

RP: Again, it’s all desperation. I don’t have an agent or a publisher backing me on anything, and so it’s really up to me to get asses in the seats. No one honestly cares, and that’s fine they don’t have to, I haven’t earned that yet, so I’m always forced to find methods to get a few eyes in my direction. But also, and I want to stress this, it’s fun too! Desperation doesn’t have to be a downer!

What’s surprised you most about replying to Twitter threads with your books? Any noteworthy co-sign?

RP: That it worked and actually moved copies! If it didn’t I would’ve stopped a long, long time ago, but even now I’ll sell a few Palmer Hotels a month because of this absolutely stupid method of advertisement. What is a boy to do! 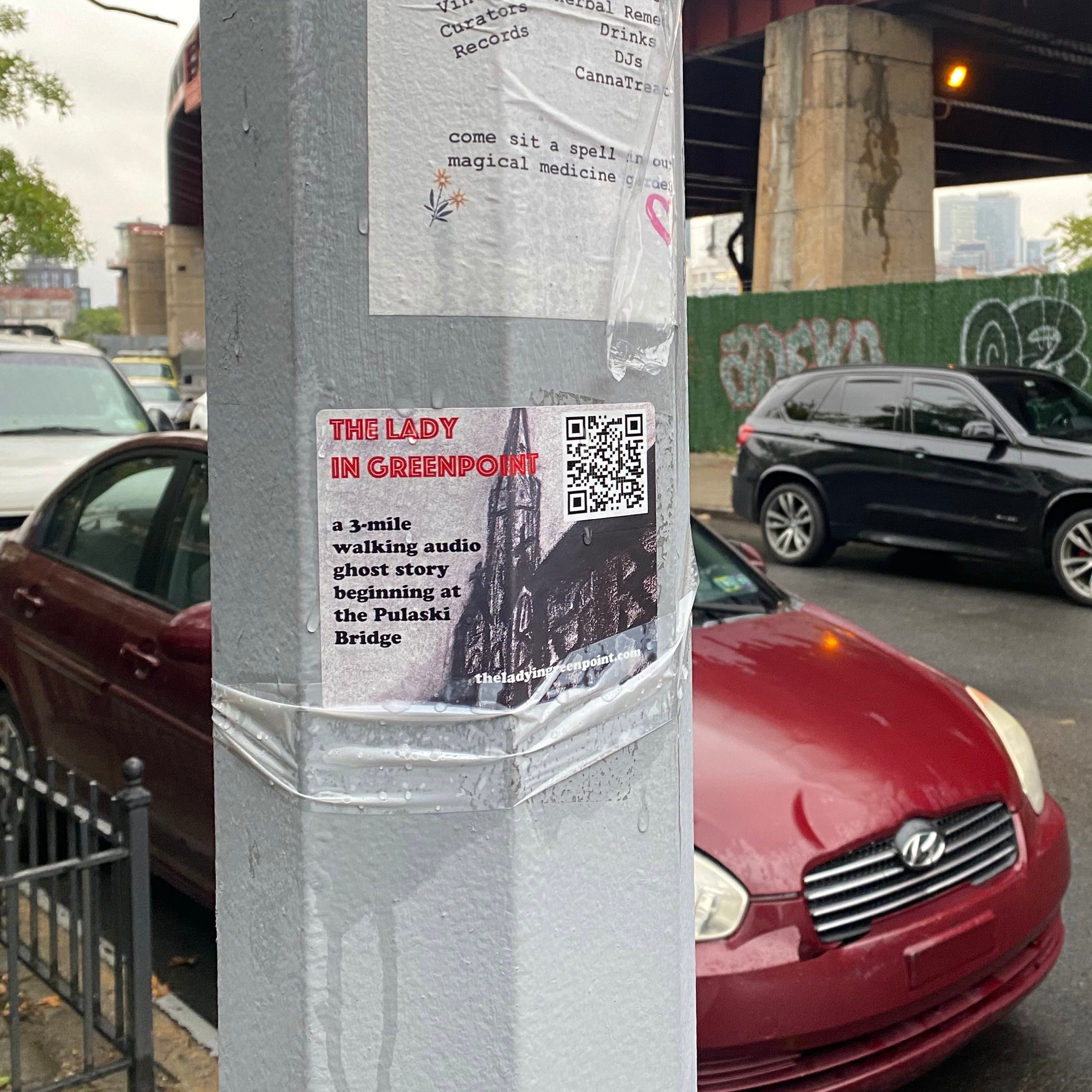 Guerrilla marketing at its finest. 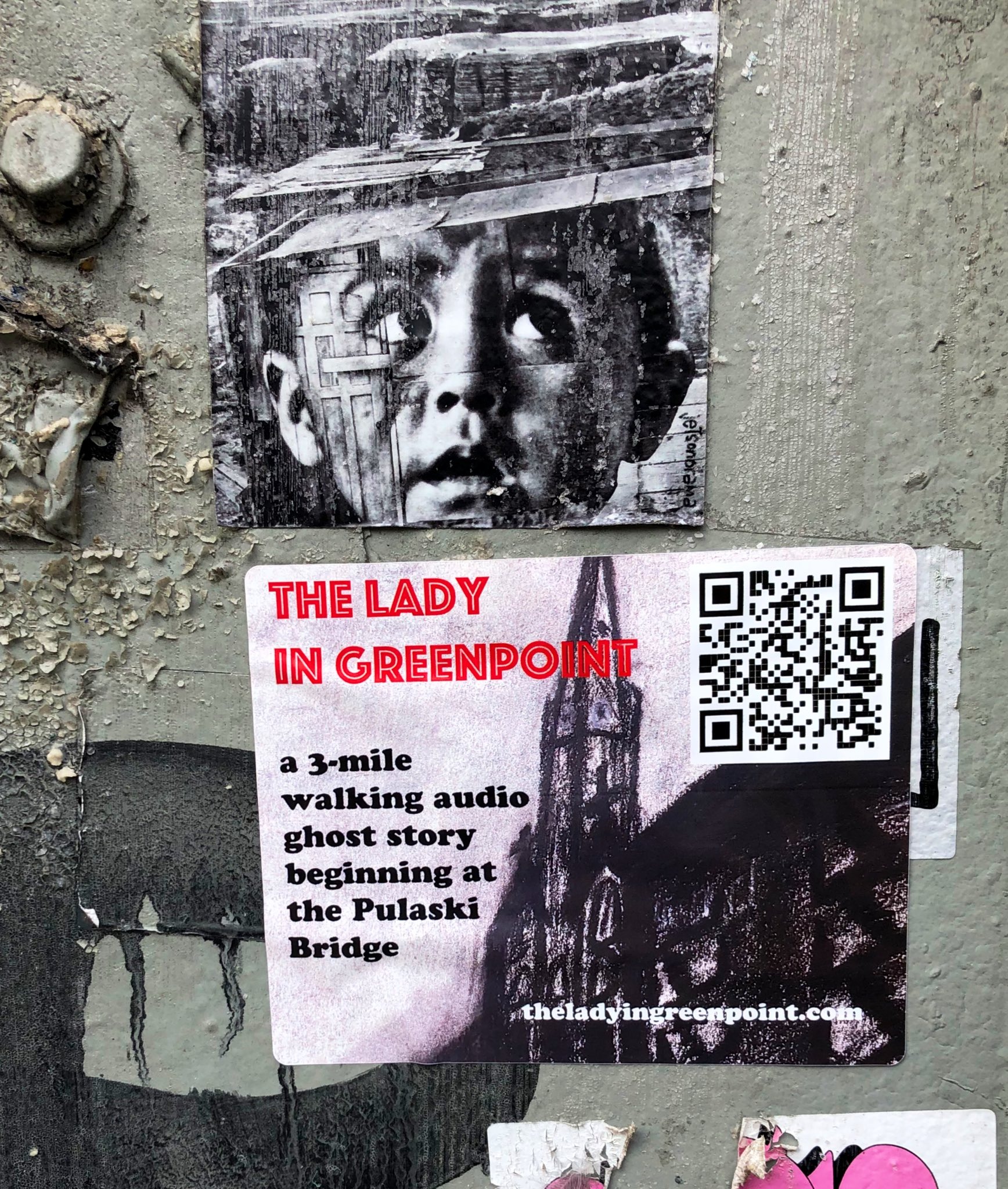 Plastered around Greenpoint and its surrounding neighborhoods, homemade stickers advertised the spookiest story set in Brooklyn.

What’s surprised you most about replying to Twitter threads with your books? Any noteworthy co-sign?

RP: That it worked and actually moved copies! If it didn’t I would’ve stopped a long, long time ago, but even now I’ll sell a few Palmer Hotels a month because of this absolutely stupid method of advertisement. What is a boy to do!

What are you reading right now?

RP: I try to read 3-4 books at once — only 15-20 pages of each a day — because my attention span is shit, mixing fiction and nonfiction as best I can, so right now I’m reading Grand Hotel by Vicki Baum, Bury My Heart at Wounded Knee by Dee Brown, American Pastoral by Philip Roth, and a collection of Victorian-era ghost stories.

What are your favorite coffee shops in Greenpoint?

RP: Probably Sweetleaf or Odd Fox since they’re the closest to me!

What’s next for Rick Paulas?

RP: Depends on the rent!

With the weather cooling down, the leaves beginning to change, and the need for more spooky entertainment entering the fore, it is this reporter’s recommendation that you visit www.theladyingreenpoint.com, head to the Pulaski Bridge, and press play. For only a $10 donation, it might be the best 3 hours you spend in Greenpoint (next to partying at The Lot Radio).